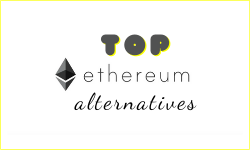 This post describes 8 Ethereum Alternatives you should consider using.

No doubt, Ethereum stands out in enabling the development of DApps and DeFi Apps using smart contracts.

However, we cannot deny that this blockchain is presently faced with problems that are threatening its user base.

As a result, developers are seeking other blockchains that provide the same solutions yet without these problems.

And in this post, you will find 8 such blockchains.

If you are ready to check them out, let’s jump right in!

These blockchains made my list because they enable developers to build DApps using smart contracts just like Ethereum.

As you read about each of them, you’ll see what they do differently to achieve the same goal.

The first platform on my list of top Ethereum Alternatives is the Qtum blockchain (pronounced “Quantum”).

It was founded in 2016 by Patrick Dai and Jordan Earls.

Qtum is an open-source blockchain that maximizes the security of Bitcoin’s UTXO model and also executes smart contracts.

UTXO means Unspent Transaction Output. It is the amount of digital currency remaining after a cryptocurrency transaction is completed.

The use of EVM makes it possible for DeFi smart contracts to migrate from Ethereum to Qtum.

One unique thing about this platform is its Decentralized Governance Protocol (DGP).

DGP enables users to vote for an increase in block size without the need for a hard fork.

This helps boost TPS (transactions per second) and in turn improve scalability. Great!

Developers can comfortably build DApps and DeFi apps on Qtum.

It has a higher TPS than Ethereum and charges low fees.

So far, different tokens have been created on this platform including MediBloc (MED), SpaceChain (SPC), Ink (INK), Qbao (QBT), etc.

Yes. The popular Cardano made my list of top Ethereum Alternatives.

Cardano is a decentralized and open-source public blockchain that executes smart contracts.

It facilitates peer-to-peer transactions with its native token – ADA.

Charles Hoskinson and Jeremy Wood founded the platform in September, 2017.

Cardano is the first platform developed with a peer-reviewed research paper.

It uses the Ouroboros proof-of-stake to boost scalability as more transactions are confirmed within a short time.

Another way it boosts scalability is by employing RINA technology (Recursive InterNetwork Architecture) to reduce the network bandwidth among nodes.

Cardano also tries to achieve interoperability by enabling multiple blockchains to interact with each other.

Also, the platform has a decentralized wallet where funds are stored for the continuous development of the platform.

Impressively, Cardano shares the combined character of Bitcoin and Ethereum.

Developers can leverage the higher TPS and cheaper gas fees of this platform (when compared to Ethereum) to build DApps and DeFi apps.

You can read our Cardano Review to learn more about the platform.

Polkadot is one of the youngest blockchains and looks very promising.

It is an open-source sharding multichain protocol that facilitates the transfer of digital assets across chains.

Dr. Gavin Wood founded the platform in May 2020.

It achieves this through its 4 compartments: Relay chain, Parachains, Parathreads, and Bridges.

In addition to decentralized applications, Polkadot allows you to build your blockchain on it. Amazing!

Not just that, any blockchain on Polkadot can communicate with external blockchains like Ethereum.

And as such, the network can adopt new features or remove bugs without a need for a hard fork.

Most importantly, Polkadot has a higher TPS and charges lower fees than Ethereum.

The blockchain is already hosting some DApps like Akropolis, Acala, RockX, etc.

You can read more about this platform here.

The Binance Smart Chain is a blockchain network built by Binance for running smart contract-based applications.

The goal is to help developers build DApps as well as enable users to manage their digital assets across the Binance chain and Binance Smart Chain.

It was launched in 2019 but has received more attention since the beginning of 2021 because of high gas fees on the Ethereum Blockchain.

BSC employs the Ethereum Virtual Machine (EVM), which enables it to run Ethereum-based applications like MetaMask.

Therefore, developers can create or move DApps, tools, etc. on the BSC network without much resistance.

Additionally, this blockchain uses a Proof of Authority (PoA) consensus model, which enables transactions to be processed faster.

Also, it maintains a Community-Based Governance, where users who stake the native token – BNB, contribute to network security and vote for proposals.

BSC fares well as an Ethereum alternative because it provides the same solution at a cheaper and faster rate.

Neo (formerly Antshares) is an open-source blockchain founded in 2014 by Da HongFei and Erik Zhang.

It tries to achieve a “smart economy” by utilizing blockchain technology/smart contracts to issue and manage digital assets.

Just like Ethereum, anyone can build DApps and smart contracts on the NEO blockchain.

This blockchain employs the delegated Byzantine Fault Tolerance algorithm to deter untrustworthy participants from taking part in the blockchain’s operation.

Impressively, the Neo blockchain undergoes continuous development, which helps sustain the future of the network.

Also, two native tokens are used here – NEO which is the governance token and GAS which is used to pay for transactions.

Developers who are having a hard time building on Ethereum can maximize the EcoBoost initiative of NEO that funds high-potential projects.

Do you want to know more about this platform? Then read our NEO Review.

Another blockchain that plays well as an Ethereum alternative is NEAR.

NEAR is a decentralized protocol that focuses on the creation of DApps with high scalability and low fees.

We can trace this success to the Nightshade PoS consensus mechanism which the platform uses.

Interestingly, the NEAR blockchain pays developers 30% of the transaction fees from users that utilize their smart contracts.

Users can move their Ethereum assets to NEAR via its Rainbow Bridge. Superb!

Additionally, holders of the native token – NEAR, can determine how network resources are allocated.

NEAR Protocol was launched in April 22, 2020 by Alex Skidanov and Illia Polosukhin.

Cosmos is another blockchain that made my list of Ethereum alternatives.

It is a network that comprises of many independent blockchains.

This platform aims to solve the “slow, expensive, unscalable, and environmentally harmful” problems of most proof-of-work protocols (e.g. Bitcoin and Ethereum).

Also, Cosmos has a modular framework that makes creation of DApps easy.

Additionally, and you will like this one, it features an Interblockchain Communication protocol that allows blockchain networks to communicate with each other.

That’s not all, this platform uses the Tendermint PoS to achieve scalability.

The native token for Cosmos is ATOM and it plays a huge role in its governance and security of the network.

Building on Cosmos is cheaper and faster than what is obtainable on Ethereum.

Learn more about the platform here.

Lastly, on my list of Ethereum alternatives is EOS.IO, a blockchain platform with smart contract capabilities.

It was launched by the company – Block.one, in September 2017.

This blockchain is hosting about 686 DApps with thousands of daily active users.

It has a high TPS (50,000 transactions per second) which is more favorable than what Ethereum is offering.

Plus, there are no fees. Blow my mind!

EOS is the network token and users stake it in order to vote.

Read more about the platform here.

Apart from the eight blockchains described above, other platforms that compete with Ethereum are Flamingo, Algorand, Tezos, BSC, etc.

So, what’s the fate of Ethereum with these alternatives?

Find out in the next section!

Where Does Ethereum Stand?

It is true that all the platforms described above were designed to do better than Ethereum based on scalability, TPS, and gas fees.

Therefore, one would expect that developers and other blockchain users will migrate to the new platforms in the blink of an eye.

However, that is not the case. Though these platforms have been adopted by different individuals and businesses, Ethereum has not lost to any of them.

We can trace this gap to the fact that Ethereum is the first of its kind.

Over the years, it has gained the trust of the thousands of DApps and DeFi apps built on it.

Despite its flaws, Ethereum is standing strong and has remained the #2 most popular crypto, coming only after Bitcoin.

A major advantage Ethereum has over its alternatives is its large user base.

Besides, these other platforms are not without their flaws. EOS for example, has been hacked several times.

Furthermore, Ethereum is working towards launching a second version which will be free of the problems the blockchain is facing right now.

(Read our review on Ethereum 2.0 to learn more)

In the end, the blockchain to go for depends on the preference of the developer or end-user.

We designed a course to show you how to trade crypto profitably without being defrauded.

Hurry now to ctmastery.com to register!

You can also join our Telegram community at  https://t.me/ctmastery

We have now come to the end of our discussion on the top Ethereum alternatives. I hope you enjoyed the read.

Now, tell me, which of the Ethereum alternatives described above have you used before?

Was the experience worth the try?

Also, are there other platforms which you feel should have made my list?

Let me hear your thoughts in the comments section right now.