Cosmos (ATOM) Review – Everything You Need To Know About The Internet Of Blockchains! 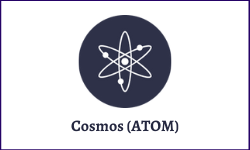 In this post, I reviewed the Cosmos ecosystem a.k.a the internet of blockchains.

Cosmos is popular for enabling many decentralized applications to interact with each other.

Keep reading to understand how Cosmos works and what you can do with its native token, ATOM.

Click on any item above to read its details immediately.

Cosmos is a decentralized network of independent yet interconnected blockchains.

Usually, each blockchain is unique in itself and interacts only with its components.

But the case is different with Comos, it allows various blockchains to interact with each other thereby, boosting efficiency and productivity.

That is to say, transactions e.g. token swaps are completed seamlessly across chains.

Little wonder why it tags itself as “The Internet Of Blockchains.”

The origin of Cosmos is traced back to the introduction of Tendermint in 2014.

Tendermint is software for securely and consistently replicating an application on many machines. And Cosmos operates with Tendermint.

Jae Kwon (the creator of Tendermint) and Ethan Buchman launched Cosmos in 2016.

Their goal was to remove the fragmentation in the industry by enabling the blockchain networks to communicate with each other.

Gratefully, this does not prevent the sovereignty of these networks.

Rather, they get to process transactions faster and explore a variety of use cases.

Let’s see how Cosmos connects these blockchains in the next section.

The Cosmos ecosystem has a foundational chain called Cosmos Hub.

It is on the Cosmos Hub that all the blockchains on the network (referred to as zones) interact with each other.

Also, the Inter-Blockchain Communication Protocol (IBC) is the tool that helps these blockchains connect to each other.

[In summary, we can say that zones interact on the Cosmos Hub with the help of IBC]

Furthermore, there is the Cosmos Software Development Kit (Cosmos SDK), which is a framework that enables developers to create applications on the network.

With Cosmos SDK, developers don’t need to code from scratch.

They simply make use of the modules on the framework.

When it comes to security, Cosmos uses the Proof Of Stake (particularly the Tendermint BFT) consensus mechanism.

Therefore, validators on the network stake the native token, ATOM, to qualify to confirm transactions.

Validators are incentivized for their role.

And users can delegate their tokens to these validators to earn a portion of the block reward.

Also, validators are penalized when they act dishonestly.

Let’s talk more about ATOM in the next section.

ATOM is the native token of the Cosmos hub.

The Interchain Foundation (the body supporting Cosmos) organized a private sale for ATOM in January 2017 and a public sale in April 2017.

A total of $16 million was raised from both sales and about 260 million tokens were distributed.

More details of this distribution are given below:

ATOM is used for staking, governance, and paying transaction fees.

And like other coins, it has had its highs and lows in the crypto market.

Holders of this token can stake it to earn rewards or trade it for other coins.

Also, you can safely store your tokens in any of these wallets: Ledger, Trezor, Trust, Metamask, Atomic, Math, etc.

Interesting note: ATOM has a yearly inflationary rate of 7-20%. This is how Cosmos controls the circulating supply of the token. When 67% of all ATOMs are staked, the inflation rate will stop changing. Click here to learn more.

So, is this token worth your money? Read the next section to know what I think.

4. Is ATOM A Good Investment?

I believe it is following its variety of uses.

For example, when you stake ATOM, in addition to receiving more ATOMs, you’ll receive cool incentives like new tokens added to the Cosmos network.

Also, you can participate in governance and vote for changes on the network.

And more adoption means an increased value of the ATOM token.

In the long run, complex applications will become straightforward to construct.

This also speaks to massive adoption and a brighter future for the token.

Not just that, the founding team recently launched the Interchain Accounts upgrade in April 2022.

Following this improvement, innovations can be made in distinct applications on the network without a need to upgrade the entire interchain.

Note: Interchain here, refers to the network of interconnected blockchains on Cosmos.

In other words, changes can be made to the applications built on the Cosmos network independently of each other.

Also, it proves that the founders of Cosmos (ATOM) are relentless in improving the network to serve users better.

So, you’ll not be wasting funds if you buy this token.

Already, more features are in the works like liquidity pools, wrapped tokens, etc.

Moreover, Cosmos has higher scalability when compared to older blockchains like Ethereum.

Let’s better compare these blockchains in the next section.

Ethereum is the first-ever blockchain to enable the building of other applications on it.

However, it faces the problem of scalability which Cosmos is designed to solve hence the need for this comparison.

The major difference between Ethereum and Cosmos is that applications on Ethereum cannot interact with each other but they can on Cosmos.

But the Cosmos blockchain uses the PoS consensus mechanism which facilitates fast transactions.

Check out the comparison table below for more features:

It appears that Cosmos has a higher potential than Ethereum but the latter has a larger user base.

Impressively, Cosmos achieved a connection to Ethereum via the Osmosis DEX and the Gravity Bridge in January 2022.

Osmosis DEX is a peer-to-peer blockchain that people can use to create liquidity and trade IBC enabled tokens.

Gravity Bridge is a decentralized Cosmos blockchain whose primary purpose is to secure the operation of bridges between blockchains.

This means that investors from Ethereum can easily come to Cosmos and try out its opportunities.

Also, it has added to the market cap of Cosmos by a reasonable amount.

Therefore, Cosmos and Ethereum are not rivals. Rather, they complement each other.

We’re almost done here. Let’s answer some frequently asked questions and then we can call this post a wrap.

How do I stake ATOM?

Apart from being a validator node on Cosmos, you can stake ATOM on platforms that support it.
For example, Allnodes enables you to delegate your tokens and earn staking rewards at 17.83%.
On Binance, you earn up to 30.49% APY when you lock up your ATOM for 120 days.
Then on Atomic wallet, staking ATO attracts a 10% APY.

I believe it is because
– There is evidence of its registration on Whois.com
– The founders are known
– Different projects are running on the blockchain
– It is listed on Coinmarketcap and GitHub
Nevertheless, DYOR before investing in Cosmos.

How do I learn about changes in the Cosmos network?

Enroll in our Crypto Trading Mastery Course to learn how to trade cryptocurrencies profitably. Go to www.ctmastery.com.
You can also join our Telegram community at https://t.me/ctmastery

We have now come to the end of our discussion on Cosmos. I hope it was worth your time.

This blockchain has many possibilities. You can choose to explore the various zones, build on its modular framework, or stake the native token ATOM and earn rewards.

So, what’s it going to be for you? Tell me in the comments right away.

Perhaps, you already staked ATOM, how rewarding has it been?

Or maybe you have questions about this project. Let’s have them in the comments section too.

Before you go, please share this article with your friends. Thank you!