What Is A 51% Attack? | Coins That Have Suffered It 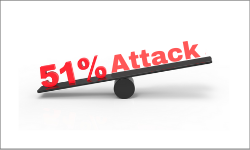 In this post, I talked about 51% attack, a dreaded event of the blockchain.

As you already know, the blockchain is designed to promote transparency and fairness.

Nevertheless, the smooth running of a blockchain can be disrupted, leading to a breach of trust.

And this is what 51% attack is all about.

Keep reading to find out more!

Click on any item above to read its contents immediately.

A 51% attack is an attack on a blockchain by a collection of miners in charge of >50% of the network’s computing power.

Normally, blockchain operations should be impossible to disrupt because it is not easy to get a greater than half of its community to kick against an existing rule.

However, certain blockchains in the cryptocurrency space have suffered this disruption.

And this is what a 51% attack entails – when more than half nodes join forces to limit the smooth running of their blockchain.

But hardly can they add new blocks or alter old ones.

All the same, the damage is usually massive even though the blockchain is not destroyed.

Another way to look at it is when a miner or group of miners obtains enough hash rate to create their own blockchain.

So, they create “orphan” blocks in that blockchain, leading to a reorganization of the parent chain and an opportunity to steal funds.

You can also look at it as a soft fork on the blockchain.

In the next section, we’ll see how 51% attack works.

Cryptocurrencies are blockchain-based and so transactions are open to users and the general public for review.

Each block in the blockchain contains records of completed transactions.

And a block can only be added to the chain when it has received enough confirmations from the network.

After a block is mined, it cannot be altered because the network users will quickly spot a fake ledger.

But then having a greater portion of the network’s computing power (more than 51%), enables a group of attackers (miners) to influence the record of new blocks.

When these happen, the blockchain is said to have suffered a 51% attack.

Usually, the attackers will do away with users’ funds especially from exchanges where the coin of the blockchain is listed.

I will not fail to mention that though attackers earn huge sums, it does cost a lot to perform an attack.

Considering Bitcoin for instance, it will cost about $716,072 to carry out an attack for an hour because the coin has a very high market cap.

That is why 51% attack is more popular with smaller blockchains.

Now, let’s look at the coins that have suffered this attack.

In the table below, you will find the coins that have suffered 51% attack, their hosting blockchain, the amount lost, and the date it happened.

Quite a number, right?

Next, we’ll look at the outcome of an attack on a blockchain.

Though an attack does not result in the creation of new blocks or enable the destruction of old blocks, it does have gross effects on the blockchain including:

li. Loss of digital assets or cash by crypto users and exchanges.

ii. Users and miners lose confidence in the blockchain’s reliability and security.

iii. Miners may confirm blocks that will be rendered invalid by the fork created by the attackers.

v. The blockchain will be forced to check transactions manually rather than rely on automatic confirmations.

This will hinder the growth of the coin for the time being.

Is there a way to avoid these effects?

Find out in the next section!

a.  Adopt Another Validation Technology

One way that blockchains can prevent an attack is by introducing a different mechanism for the confirmation of new blocks.

For example, Ethereum 2.0 uses Proof of Stake (PoS) as an alternative to the Proof of Work (PoW) used by Ethereum.

(Look at the table displayed earlier, you’ll notice that most of the affected blockchains use PoW).

This is an excellent choice because PoS is a more secure system.

Here, it is more expensive to gain 51% monopoly over block validation.

Besides, anyone holding majority of the coins faces a risk of depletion in the value of his holdings when an attack happens.

Hence, sponsoring an attack will be the last thing on his mind.

Other affected coins have also adopted new technologies to prevent recurrence of attacks like;

Secondly, increasing the number of confirmations for a transaction can also limit the possibility of an attack.

This approach is used by Krypton to remove the risk of double-spending the coin on the Bittrex platform.

For exchanges that sell BTG, the confirmations have been increased from 5 to 50.

Thereby, reducing the ease of a group reaching more than 51% of the community.

Thirdly, a 51% attack can be prevented with a strong network community.

When community members can vote in or remove block validators, it is difficult for an attacking group to obtain 51% computing power.

Typical examples of this strategy are the EOS, Cardano, and NEO blockchains .

On a general note, users and exchanges are advised to accept only the funds with more confirmations.

Such funds have a lower risk of being lost in a 51% attack.

Lastly, Node operators should be wary of any behavior suggesting a DDoS as this a signal that an attack is being attempted.

Can 51% attack lead to a change in historical blocks?

No. The farther behind a transaction is dated, the lower the possibility of changing it.

Can a less percentage of the network create the same effect as a 51% attack?

Yes. A group of miners having less than 50% of the network’s computing power can launch a similar attack.
However, the chances that it will be successful are very low.

We can teach you how to trade cryptocurrencies profitably. Simply enroll in our Crypto Trading Mastery Course by visiting www.ctmastery.com. You can also join our Telegram community at https://t.me/ctmastery. See you there!

A 51% attack remains a possibility for every blockchain. It then depends on the community to maintain stability and decentralization.

This is where we’ll draw the drapes on our discussion on 51% attack. I hope it was worth your time.

Now, I’d love hear from you;

What is your take on 51% attacks? Do you have better ideas on how to prevent them?

Let me have your responses in the comments section right now.