Home » Reviews » Wallet » KeepKey vs. Trezor One — A Head To Head Comparison

This article presents the most comprehensive comparison of two of the Top 6 hardware wallets in the market today,  Keepkey Vs Trezor One.

Luckily for crypto investors today, the introduction of new hardware wallets has created a competitive environment between the wallet providers.

This competition has led to price reductions and enhanced wallet features. However, choosing the right wallet has become a challenge to many.

I will give you a head to head comparison of these two wallets.

After now, you will have no problems identifying which is best for you. I have also reviewed the two wallets thoroughly in previous articles, where I discussed every single detail about them.

I have made everything simple and clear, here is a list of what I’ll be covering today. Click on any of them to take you straight to the content.

Without much ado, let’s get on with – KeepKey vs Trezor.

Trezor One in a Nutshell

Trezor One is the first hardware wallet to grace the crypto industry. It was an innovation by Satoshi Labs in 2014, a company based in Cech Republic.

Unlike many wallets today, the Trezor  One has stood the test of time, some even called it the number one wallet.

KeepKey in a Nutshell

KeepKey is a hardware wallet that was launched in 2015 by Darin Stanfield, a US-based company. It was later acquired by  ShapeShift in 2017.

The wallet allows you to directly swap coins from the device via the Shapeshift App installed in it.

Now, let’s go on to compare their basic features.

KeepKey Vs Trezor One (Compared Features) 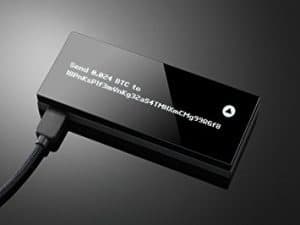 Keepkey Vs Trezor One

They will be compared based on the following categories;

The first thing on every rational buyer’s mind is the price of a product. Therefore, it is only logical that we start this comparative analysis from the price category.

The two wallets, recently reduced their prices, in a bid to attract more buyers.

The KeepKey currently sells at $ 49, while the Trezor hardware wallet can be gotten at £53 – £163 (at the time this article was written).

It displays sensitive information like backup seeds, PIN codes and private keys that are not leaked out to third party devices or malware.

The Trezor wallet comes with an OLED screen. KeepKey, on the other hand, comes with a large touchscreen that looks clearer than that of the Trezor.

Both wallets come with similar security features. However, the difference lies in the fact that the KeepKey is basically a small computer while the Trezor uses 2 secured chips. Both hardware wallets can be safely used on any computer, as they are both fully immune to virus and malware attacks.

The bottom line is, they are both equally secure.

The essence of acquiring any wallet in the first place is to store your cryptocurrencies. So, the number of coins supported by any given wallet is a vital factor in choosing which one is ideal for you.

The Keepkey currently supports up to 40 digital assets including ERC20 tokens. Below is a list of the major coins supported.

On the other hand, Trezor One offers support for over 1000 coins including  ERC2o tokens, which is way more than the Keepkey. Below is a list of some of the major coins supported.

Setting up both devices is relatively easy, their setup process is basically the same and requires just a few minutes to complete. All you have to do is, create a PIN Code and write down your recovery seed.

It is important that you back up your recovery seed in a safe place in case you forget it or something. Most hardware wallets come with recovery cards where you can safely write down your backup seed. You can also use cryptosteel for your backup.

Size and Design — KeepKey Vs Trezor

The Trezor device is smaller than the KeepKey. if you’d like a more portable device the Trezor One wins in this category.

Furthermore, the KeepKey device is beautifully designed with an aluminium glass and has just one physical button. The Trezor One is made of plastic and has two physical buttons.

If you are a fan of ‘style’, you should go for the KeepKey.

However, I think security is all that matters.

Software’s are essential to all crypto hardware wallets, it is impossible to use a hardware wallet independently without software as they serve to interact and command the wallet.  I shall list the most prominent software wallets in the table below and their compatibility with our contesting hardware wallets.

That’s it on our Keepkey Vs Trezor One.

Choosing between any of these two will depend totally on you, although the Trezor ranks higher than the Keepkey in so many areas including wallet reputation.

If you like something portable to carry around with you, I suggest you go with the  Trezor One. It’s also a perfect fit for those in love with durability.

However, the KeepKey is a great choice for those in love with ‘style’. It has a larger screen and its design is far sleeker than the Trezor. Both wallets are a lot safer than traditional custodial wallets and exchanges. It’s best you get one to have a feel for yourself.

I hope this article was helpful?

It’s you turn now to give me feedback.

Which one of the wallets’ features do you fancy?

Leave your replies or any questions you have for me in the comments section below.

Join 7,128 other subscribers.
Share this ArticleLike this article? Email it to a friend!
Email sent!