This Is Why Bitcoin Will Be Accepted As A Legal Tender Globally Or Never! 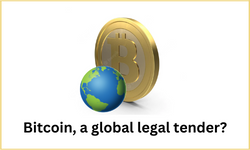 Although millions of people are trading bitcoin on different crypto exchanges and are making profits, only two countries have openly declared bitcoin as a legal tender.

How come? How is it that the no. 1 cryptocurrency which has proven itself for more than 11 years, to be a store of value and a form of digital payment is still traded secretly in most countries?

Keep reading this post and I’ll tell you why.

Why Bitcoin Will Never Be Accepted As A Legal Tender Globally

Here are a few reasons why I think Bitcoin will never be accepted as a legal tender.

I garnered these reasons after discussing with Jude Umeano, a crypto expert.

One major reason why Bitcoin has not climbed the global ladder of legal tenders is because of its decentralized nature.

I think it’s okay to say that governments are intimidated by bitcoin because traders of the coin are anonymous.

And as such, they cannot monitor who owns what and who is transferring what.

In other words, they cannot regulate it. Yes, bitcoin is not bounded by financial laws.

This makes them “mad” hence the delay in accepting bitcoin as legal tender.

But Jude Umeano has a different opinion.

The way he sees it, governments can regulate bitcoin if they want to.

In his words, “it’s easy to regulate coins whose history of transactions can be traced like bitcoin.”

And it is true; cryptocurrencies apart from private coins like Monero have block explorers where transactions involving the coin can be traced.

Additionally, governments can work together with crypto exchanges (like the case of Coinbase) to regulate bitcoin.

It’s a matter of interest.

Another reason I think bitcoin is struggling to make it into the zone of legal tenders is that bitcoin transactions cannot be reversed.

Transactions added to the bitcoin blockchain (i.e. confirmed) cannot be modified or deleted.

Otherwise, you risk breaking the blockchain. And governments do not like that.

However, Jude Umeano believes that there is a way out of this bitcoin hitch.

He says that a crypto exchange can set up a reversal feature that will allow for the reversal of transactions.

After all, the wallets involved in the transaction are within its ecosystem.

That’s why crypto assets can be seized whenever a fraudulent action is suspected.

For example, Coinbase can process the reversal of transactions when a customer makes such a request with the aid of his/her registered email address.

Even, Jude talked about his experience in this regard. He had sent USDT (BEP-20) to an OKX wallet but OKX does not support the BEP-20 chain.

Fortunately, OKX notified him on time and requested an appropriate wallet, and returned his funds to him. So cool!

In the case of decentralized exchanges, Jude says that smart contracts can help.

It just has to be included in the contract that the transaction should be reversed if certain terms are not met.

Therefore, the reversal of transactions is something that can be worked on.

Low transaction speed is a major problem of bitcoin that has reduced its chances of becoming a legal tender.

Visa, for example, processes 2,000 transactions per second but bitcoin can process only seven. Oh my, the gap is very wide.

Therefore, decentralization may seem attractive to the crypto community but because of it, transactions are delayed.

Governments are not okay with that as it can disrupt major processes when there is congestion of transactions, which is likely to occur often. Oops!

No matter how much we appreciate the relevance of bitcoin in crypto and the finance industry in general, we cannot deny that it is not an option for micropayments.

Imagine if you needed to perform a transaction that cost $1 or maybe N5, you know doing it with bitcoin is simply a headache.

So, how do you want to run it? Not to mention that transaction fees may be higher than the cost of the transaction itself.

And that takes me to the next point of price volatility.

But before we get there, Jude provides a glimpse of hope here that micropayments can be made possible with bitcoin using the lightning network.

No doubt, high price volatility is a key factor as to why bitcoin has not been accepted globally as a legal tender.

Remember when bitcoin hit ATH of $69,045 in November 2021, investors’ joy knew no bounds as they accrued massive returns.

Fast forward a year later, bitcoin is in the low of the lows, dragging other cryptocurrencies alongside.

You can now understand why governments have restrictions around bitcoin. They don’t trust it.

As in, they can arrange factors that will influence fiat or set laws in favor or disfavor.

The government cannot control bitcoin, and that for them is a problem.

They want to be in control and not brought under the control of bitcoin like the case of most crypto investors right now.

That’s why they view bitcoin as a tool for money laundering since transactions cannot be tracked.

But with fiat currencies, they can trace the embezzlement of funds and arrest the culprits.

Last but not least, bitcoin has been despised several times because of the negative impact that its mining has on the environment.

Research shows that amount of electricity used in mining bitcoin is more than what is used in the whole of Argentina.

So imagine if the whole world needed to mine bitcoin for use, it will be crazy!

Besides, bitcoin has a capped supply which is predicted to be reached by 2024.

So, what happens then, huh?

Nevertheless, research is ongoing to discover how to mine bitcoin without harming the environment.

And that’s on the bright side.

Bitcoin may never be accepted globally as a legal tender because of its high volatility, impact on the environment, and more.

Even El Salvador and the Central Africa Republic who have made the bold move are being criticized because both countries are poor and may be endangering their economy by adopting bitcoin.

Nevertheless, technology is advancing. Who knows, bitcoin may override its limitations and become accepted globally.