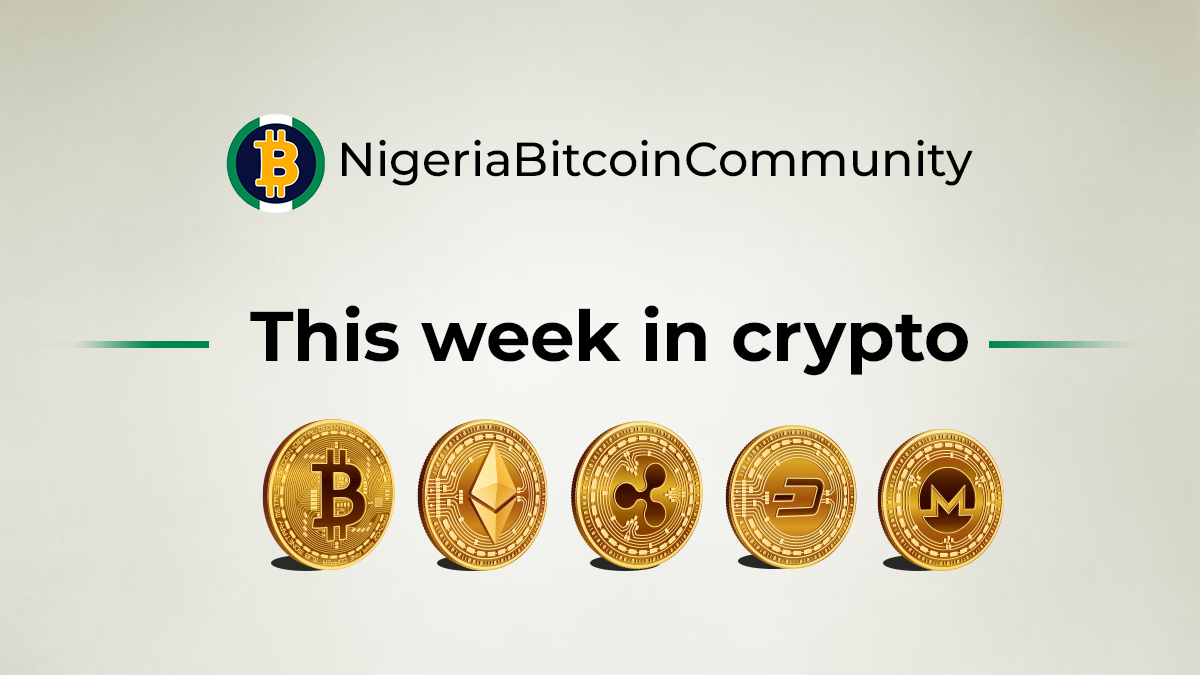 Welcome to another episode of crypto weekly, where you get updated on the significant events shaking the cryptoverse over the past few days.

On today’s episode of crypto stories and happenings, we bring you the following:

According to data from Opensea, at the time of writing, the collection’s trading volume is 900 ETH, or about $1.08 million.

Some tokens are selling for much higher prices.

These cards consist of images of the 45th president of the U. S. A. standing in front of the Statue of Liberty holding a torch, which is currently listed at 20 ETH, or about $24,000.

The Nigerian government has stated intentions to pass a law that will recognize the usage of bitcoin (BTC) and other crypto assets to keep up to date with “global economic innovations” and “global practices”.

According to the Punch, “The proposed law will also define the regulatory roles of the Central Bank of Nigeria and the SEC [Securities and Exchange Commission] regarding digital currency,”

This was citing the Chairman of the House of Representatives Committee on Capital Markets and Institutions, Babangida Ibrahim.

According to the article, if the Investments and Securities Act 2007 (Amendment) Bill passed into law, the Securities and Exchange Commission would be able to recognize bitcoin and other digital assets as capital for investment.

The proposed bill would also define the SEC’s and CBN’s regulatory responsibilities for digital currency.

3. Isreal to Seize a Considerable Amount of Crypto Wallets

to seize all the crypto in over 150 digital wallets that it had blacklisted for allegedly funding terrorist groups.

Israeli Defense Minister Benny Gantz said that, since the ruling,

the authorities seized $33,500 from digital wallets linked to the militant group Hamas.

4. FTX founder Bankman-Fried Agrees to Extradition to the US

Sam Bankman-Fried may be ready to come to the United States to face criminal charges related to the collapse of cryptocurrency exchange FTX following a chaotic court appearance in the Bahamas.

A lawyer for Bankman-Fried has been quoted as saying Monday the FTX founder has agreed to be extradited to the United States.

A court hearing was stopped earlier in the day when his attorneys said it was premature for him to stand before the court.

Bahamian authorities arrested Bankman-Fried last Monday at the request of the US government.

US prosecutors allege he played a central role in the rapid collapse of FTX and hid its problems from the public and investors.

The Securities and Exchange Commission said Bankman-Fried illegally used investors’ money to buy real estate for himself and his family.

The 30-year-old could potentially spend the rest of his life in jail.

5. Binance.US set to acquire Voyager Digital assets for $1B

According to a new press release published on Dec. 19, cryptocurrency exchange Binance.US will acquire assets of bankrupt crypto lender Voyager Digital for $1.022 billion.

Previously, FTX US was the largest bidder for the firm’s assets, with an offer of $1.4 billion.

The $1.022-billion bid consists of the fair market value of Voyager’s cryptocurrency portfolio at a to-be-determined date in the future, along with an additional consideration equal to $20 million of incremental value.

If you want to learn how to trade cryptocurrencies profitably, then enrol in our Crypto Trading Mastery Course by going to www.ctmastery.com

However, Bitcoin has returned to the same trading range as before.

Similarly, the overall cryptocurrency market is behaving sluggishly, possibly due to the upcoming holiday trading sessions.

What does the future hold for BTC?

Emmanuel Ademakin
Crypto/Stock market enthusiast | FPL addict | I am a 500 level student of Electronic/Computer Engineering at the University of PortHarcourt.