Bitcoin Dip: What Are The Causes?|Crypto Traders React 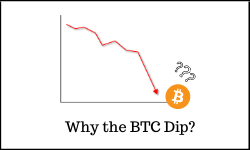 Did you notice this massive crypto dip?

Bitcoin lost more than 30% of its value, and nearly all altcoins lost four times their value. Gracious goodness!

But what really happened?

Why did the crypto market cap get so low in a matter of days?

Well, we decided to ask crypto experts for their opinion and get their responses on this matter.

Why The Bitcoin Dip?

The recent dip is something that is very much expected and should not appear so strange to any crypto trader.

As of this year, bitcoin has risen unexpectedly, even way above what traders had expected.

We were expecting BTC to get to $20K-$25K and then consolidate and go up again, but that never happened.

You see, it has risen too much, and therefore, needs a correction for a healthy upward movement and price growth.

This correction started with Elon Musk’s tweet and then skyrocketed with the bad news from China, being that they are the major players in the crypto industry.

Right now, I think the Bitcoin price has gotten to its rightful position, and I am very happy about this correction.

Also, I am hopefully looking for the price to go even higher than it was before.

Not minding; some people believe we are in the “Bear Season”, but I personally do not think so.

For me, I firmly believe we are still in the “Bull Season” and this correction has given me more confidence in the future of cryptocurrencies.

Here are the reasons for the dip:

– Elon Musk/Tesla stopped accepting BTC as a means of payment due to BTC using too much non-renewable energy.

– A correction was expected as the traditional stock market (S&P 500/Nasdaq) experienced a major correction – there is no 1:1 relationship between them, but they tend to behave the same way over time.

– US Government announced that they would be investigating Binance over tax allegations.

All of these caused a strong FUD in the crypto market.

The dump, however, declined immediately.

The BTC price went down to $30K-$35K (Support) – More people started accumulating BTC at that price, hence, pushing the price up, bit by bit.

From my viewpoint, I believe that the following will help resuscitate the price of BTC and a bull trend in general:

– Also, from a technical viewpoint, I strongly believe that if BTC breaks the resistance at $40K-$42K, the price will push back up to $50K.

Well, the dip was bound to come; it’s a correction.

On the Technical Analysis aspect:

Looking at monthly, weekly, and daily time frames, most cryptocurrencies have been in the overbought region – RSI hitting as high as 94% on the monthly timeframe.

Presently, BTC is sitting above the 0.5 Fibonacci retracement level.

– It could be the continuation of the bullish trend

When we consider the Fundamental Analysis aspect too;

–The Crypto market was marred by FUD, starting from key market influencers such as Elon Musk’s tweets about the environmental impact of bitcoin mining and the halt to Tesla’s acceptance of bitcoin.

-In the aftermath of the second wave of the Covid19, Vitalik Buterin donated over a billion Shiba Inu to India.

The outcome of this news on the crypto market is FUD (Fear, uncertainties, and doubts) on mostly retail traders who have been the major reason for the recent pump in the market capitalization of the cryptocurrency market.

Who are the major beneficiaries? The institutional buyers, simple!

It is a fact that the institutional buyers accumulated a lot of Cryptocurrencies in the wave of the dip, and retail investors and traders were the major losers.

In conclusion, the dip was important to the health of the crypto market.

But at the same time, it has a negative impact on retail traders, who are the major liquidity makers as of January 2021.

Now, the effect is that: It will take time for retail traders to regain confidence in the market and we are also approaching the bear season.

The major catalysts for the recent heavy drop in May 2021 can be attributed to Elon Musk’s tweet and historical charts.

Elon Musk made a tweet explaining that Tesla will no longer accept bitcoin based on environmental concerns.

The recent drop is also synonymous with the heavy drop in May 2017.

During the same period extending from April, the crypto market dropped by 51%. More specifically, history is repeating itself.

From a future outlook: few projects will see new ATH, we are entering a bear market and normal market wave, and therefore, no new highs again for BTC.

There are two major causes of a dip in the crypto market.

2. Profit-taking; when the majority of whales are ready to take some profit

The dip we just experienced was a result of bad news from a famous trader called Elon Musk and China’s crypto ban.

But such a dip is needed for market stability because:

New investors need to come into the crypto market and if the price had kept going up, many investors might not be willing to delve into the Bitcoin space.

This is what I have to say, the crypto market dropped in price because of:

1. Elon Musk’s tweet that they won’t accept bitcoin for buying a Tesla.

4. A lot of traders were liquidated in the futures market, and so many traders took their profit too.

Far from these points, we all know that BTC and all other cryptocurrencies are very volatile.

Again, I believe that the market just made a correction and we will be looking forward to it going up again (I can’t tell when for now).

Personally, the dip is also an opportunity for me to start accumulating more coins.?

Every good trader must expect both the negative and the positive.

A trader must expect these two sides; else that trader would be trading wrongly, even after conducting a technical analysis.

For every season, there is definitely going to be an ATH of certain cryptocurrencies.

However, from technical analysis, you will find that BTC was supposed to drop.

I personally shared a couple of analysis on my WhatsApp Status for my fellow traders to see.

I told them that “BTC has reached its ATH but at the same time, if you look at this analysis, you will definitely find that the price of BTC will drop to $38K, but it will first hit $42K”.

This analysis actually came to pass.

Now, aside from the Elon Musk tweet which affected the market grossly – this is the very first time that a single tweet has affected the whole crypto market this badly.

My advice to newbies is that:

You should trade with the money that you can afford to lose.

If you do not understand how a thing works, it is wise that you stay back and understand before you invest.

Many people have lost their entire portfolio while investing, while others have made massive profits.

More importantly, you should know the difference between Gambling and Trading -they are two different things!

If traders can actually lose while trading, how much more gamblers???

Bitcoin is here to stay, and as long as all governments around the world transition to CBDC, bitcoin and other cryptocurrencies will experience significant 10x to 20x increases.

This crash (market correction) is good for bitcoin because that’s the only way we can get a new all-time high price.

According to our trade updates forecast in April, we predicted a price correction, but the crash came too soon.

There was a lot of money pumped into the crypto market prior to this crash.

There has been a lot of industrial adoption, as well as newbies joining the bandwagon.

This created a lot of euphoria among newbies who saw the crypto market as a quick way to make money.

I mean, newbies kept pouring money into cryptocurrencies, believing that the value would continue to rise, resulting in more profits for them.

But, as you can see, the cryptocurrency market does not operate in this manner.

A correction was required to bring the crypto market back into balance.

Yes, bitcoin was overdue for a correction, but negative fundamentals caused it to crash hard and fast.

What exactly are they?

4. Binance is being investigated in the United States.

Now that the crypto market has corrected, we may anticipate a healthy movement in cryptocurrency prices.

From all indications, the bitcoin price drop was much anticipated by crypto analysts.

Bitcoin’s price must fall in order for it to become more valuable and attract new investors to the crypto space.

However, Elon Musk and the crypto ban in certain countries played a major role in pushing down the price with full force – much lower than was expected.

Here is the end of this article. Hope you enjoyed it all the way through?

Well, I was meaning to ask you:

Did you buy the dip or were you undecided about it?

Do you think we are drifting over to a bear season?

I am eagerly waiting for your response in the comment section.

And before you go, hope you don’t mind clicking on the share buttons below. Cheers!